There is a plaque in Le Windsor, an office building in downtown Montreal that used to be the grand Windsor Hotel.

Unveiled in 2017 by the Historic Sites and Monuments Board of Canada in conjunction with the National Hockey League, the plaque commemorates the founding of the league during a meeting at the hotel 100 years earlier.

“Founded here in November 1917, the NHL holds a special place in Canadians’ hearts,” begins the English wording on the plaque. It goes on to define the NHL as “the world’s predominant hockey league, growing through radio and television broadcasts and captivating generations of fans with the speed and skill of the game.”

Every word on the historical plaque is true. For me, though, the plaque is noteworthy for what it does not say – for what has been deliberately left out of this prominent expression of public history.

END_OF_DOCUMENT_TOKEN_TO_BE_REPLACED

Since I used last week’s blog post to illustrate on a very personal level why cemeteries have limitations as historical sources, I feel it is only fair to discuss here how cemeteries can also be invaluable research tools.

For some time now, I have had an idea for a public history project in my hometown. I have been curious about heritage and commemoration, specifically parks and buildings that are named after people. The best example in Owen Sound is the Harry Lumley Bayshore Community Centre, which is named in honour of Hockey Hall of Fame goaltender Harry Lumley. There is ample signage at the community centre that tells us who Harry Lumley was. But in many other instances in town, the name of the person who has been remembered is often all we know about that person. Little or nothing shows or tells us why the person was honoured.

END_OF_DOCUMENT_TOKEN_TO_BE_REPLACED

Our digital public history class recently had a guest speaker who discussed dark history tourism – things like ghost tours and torture museums. I had previously not thought much about dark history at all, because the macabre has never been of particular interest to me, so I was surprised to learn from our guest that cemeteries are dark history sites. It immediately made sense, though – if you’re in a cemetery, you’re literally surrounded by the remains of dead people. And a cemetery is a great place to search for and find local history.

END_OF_DOCUMENT_TOKEN_TO_BE_REPLACED

My wife and I returned to my home area, Grey and Bruce counties, on Thanksgiving weekend earlier this month. Part of the visit involved a trip into Owen Sound, my birthplace and the largest community in either county. I’m proud of being from Owen Sound and I like to come home for various reasons every few weeks.

We had our grandson, Briar, with us. Briar is five years old and, like me, he was born in Owen Sound, but he has not lived there since shortly after his first birthday. Because he does not remember living in Owen Sound, his father and I make a point of sharing our knowledge and our memories with him.

On this particular occasion, I wanted to share a lesson in public history, but I was the one who ended up learning something. (Not a good thing.)

END_OF_DOCUMENT_TOKEN_TO_BE_REPLACED

When our Digital Public History class was told we each had to do a podcast as a class assignment, and it could be about anything, in any format, as long as it was historical, I knew immediately what I wanted to do.

You may already know that I worked in radio for a couple of years last decade. I started as a reporter and then I became a newscaster, and for the most part it was pretty cool. (Terrible pay, but a cool experience.) But what I really wanted to be was a disc jockey.

I grew up surrounded by – no, immersed in – music. My mother was a semi-professional singer, and my sisters were talented singers too. My father and his brother played the guitar. Either a radio or a record player was always on at our house. And because my parents were into country music while my older siblings were ’60s and ’70s kids who loved Top 40, I received a very eclectic musical education at home. Nobody was surprised when I eventually started playing the guitar and singing too.

END_OF_DOCUMENT_TOKEN_TO_BE_REPLACED

I’ve been into music and sports for longer than I can remember. I used to dream about playing hockey for the Toronto Maple Leafs, but when that dream didn’t come true, I fantasized instead about being a rock and roll star. I learned how to skate and shoot a puck, and how to play the guitar and sing, but fame and fortune eluded me at every turn.

That didn’t put an end to my passions – it just redirected them. I became very proficient in sports and music trivia, which I recognize now as the start of my interest in history as a discipline. I absorbed facts about music and sports as fast as I could read them, along with the stories associated with those facts. But something has become clear to me as I have turned from journalism to professional history – a lot of the stuff that I read and thought I knew was not necessarily true.

Popular history has been populated by legends and myths that have been passed down through the generations, and rarely if ever being questioned. These may have been stories that were reported accurately at first, only to become exaggerated over time. Or maybe they were sensationalized from the very beginning. Either way, they were accepted as fact. And when that happens, they become extremely difficult to dislodge from the public consciousness.

END_OF_DOCUMENT_TOKEN_TO_BE_REPLACED

“Public practices of history are not new and many historians acknowledge today that they had been doing public history without knowing it.”

I was in my fourth year of university and working on my History Capstone project when I realized that I had already worked as a historian, and in fact I had been working in public history for years.

My Capstone topic was “Public History and Commemoration in Owen Sound, Ontario,” which is my hometown. As I researched the local museums and parks that had been named in commemoration of Owen Sound citizens, one of my top resources was the archives of the local newspaper. Having worked at that paper as a reporter for 16 years, I knew before I even started that it would be a treasure trove of primary sources documents.

What I didn’t immediately realize was that my own work held a place of prominence in that collection.

END_OF_DOCUMENT_TOKEN_TO_BE_REPLACED

I took a Beatles history course in the Winter 2018 term, something that would have been inconceivable for 18-year-old me in 1988 as I sang “I Saw Her Standing There” at my high school’s talent assembly. This term paper and that course are, by far, the highlights of my undergraduate career.

(That said, please excuse the MLA citations; I had not yet switched my major and learned that Chicago-style is the preferred format for History).

For the past five-and-a-half decades, we have lived with the notion of The Beatles as “The Fab Four.”

Of course, at the beginning there were five Beatles in the group. In fact, six men are considered to have been full-time members of the band.

But, also for the past five-and-a-half decades, as we embraced and accepted the idea of a Fab Four of John Lennon, Paul McCartney, George Harrison, and Ringo Starr, there has been speculation as to who, if anyone, could or should be considered the so-called “Fifth Beatle” – a person who is or appears to be as much a part of the band as the Fab Four themselves.

This paper will examine a number of leading candidates for the title of Fifth Beatle. They are, in alphabetical order: Neil Aspinall, Pete Best, Brian Epstein, Mal Evans, Murray Kaufman, George Martin, Chas Newby, Jimmy Nicol, Billy Preston, Tony Sheridan, Derek Taylor, and Stuart Sutcliffe. Each of these people have compelling cases, but this paper will show that if any one person really deserves the title of Fifth Beatle, it was the group’s producer, George Martin.

END_OF_DOCUMENT_TOKEN_TO_BE_REPLACED 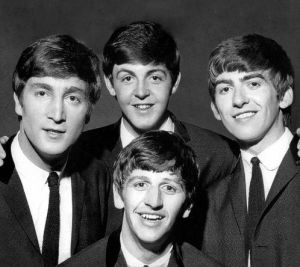 This was my first Beatles essay, at midterm in Winter 2018. I don’t know why, but I didn’t give it a title when I submitted it for grading. It’s not as good as what I came up with for my final term paper, but it’s still worth sharing here.

Do you want to know a secret?

Do you promise not to tell?

Actually, it really is no secret why The Beatles became the biggest rock band in the world by the mid-1960s.

There were many reasons why, after years of struggling in their hometown of Liverpool, they suddenly catapulted to fame in their native Britain before conquering America and the rest of the world in relatively short order. This paper will outline the main factors involved in their meteoric rise.

END_OF_DOCUMENT_TOKEN_TO_BE_REPLACED

Flesherton native Chris Neil retired last week from the Ottawa Senators and the National Hockey League, a veteran of more than 1,000 regular season games. My Owen Sound Sun Times article, from January 10, 2005, recalls his short stint with the Durham Thundercats of the WOAA Senior Hockey League during the 2004-05 NHL lockout.

MILDMAY — Kevin Sutter grew up in Eugenia and knows the four Neil brothers from nearby Flesherton well, having played hockey alongside one or more of them for most of his life.

That’s why the Durham Thundercats captain was only too happy to welcome the youngest of the brothers, Ottawa Senators right-winger Chris Neil, as his newest teammate here on Sunday.

“The more Neil boys we can get in the dressing room, the better,” Sutter said prior to Durham’s 5-4 win over the Mildmay Monarchs in WOAA Senior Hockey League action.

“(Chris is) a good guy, and you’ve got to give him a chance if he wants to play.”